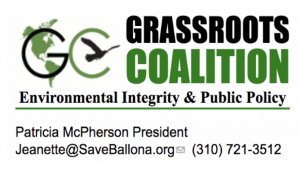 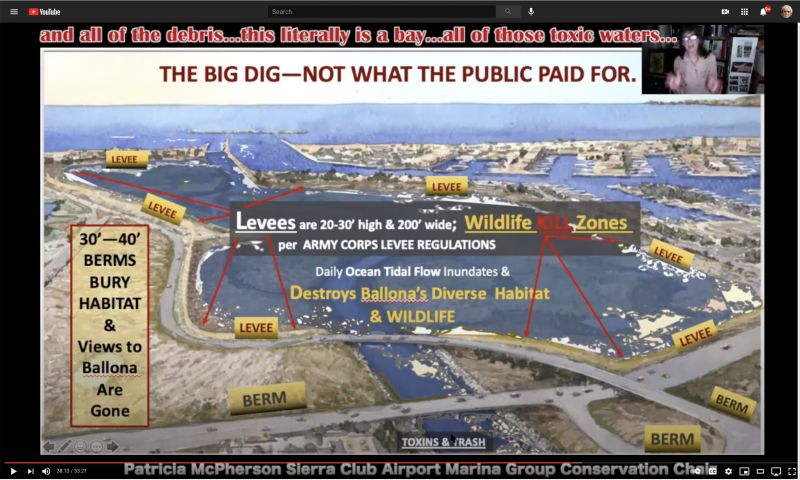 The Bolsa Chica Final Report, provides a RED FLAG warning for 'restoration' of Ballona Wetlands Ecological Reserve which is currently 100% approved by both the California Department of Fish & Wildlife and the California Coastal Conservancy for their unified approval/certification of the Final Environmental Impact Report (FEIR) for Ballona Wetlands Ecological Reserve's restoration project.

The 100% approval/certification of their mutual FEIR Plan intends to heavily engineer the removal of the current levees and create a full tidal inlet into Ballona Wetlands for the creation of a saltwater bay.  The comparison to Bolsa Chica serves well as a warning for such 100% Conservancy and CDFW devotion against performance of a Groundwater Dependent Ecosystem study of Ballona--which is what Ballona is now acknowledged as being. Still, no hydrology evaluation has been allowed to be performed by the Conservancy in its control of Ballona's bond funds that were designated for just such necessary evaluation. CDFW is required under its own Section 1019 Code of Regulations to perform a Land Management Plan (LMP) for Ballona yet has not.  The LMP per CDFW regulations would require hydrologic evaluation of Ballona.  Perhaps both the Conservancy and CDFW refuse to actually understand Ballona because both have been engaged in diverting and wasting the freshwater resources away from Ballona Wetlands. Both have been part of misleading the public and ensuring that no hydrology study of Ballona itself will occur. 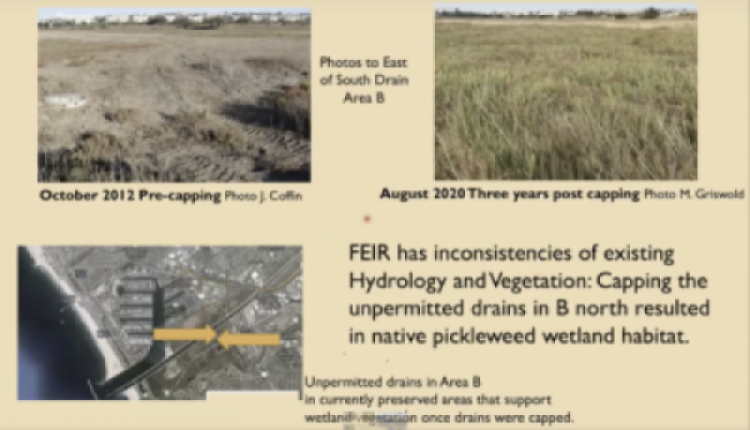 Litigation against CDFW & Playa Vista, gave rise to the Ca. Coastal Commission's order to cap the unpermitted drains that violated the Coastal Act, harming the freshwater hydrology of Ballona.  https://saveballona.org/jvstop-drying-out-ballona-wetlands-ecological-re...

The March 24, 2022 Coastal Conservancy (Conservancy) Board Meeting wherein, Board Chair, Bosco stated that the restoration of Ballona was an 'ever moving target', alluding to an openness for a substantial change from the current plan being available. Such pretense lies in their FEIR 30% Plan completion, intimating that this leaves room for another alternative is false.
The target is 100%, to turn Ballona, as was Bolsa Chica, into a fully tidal saltwater bay and to ignore any attempts to study Ballona's own unique freshwater hydrology which includes multiple underlying freshwater aquifers that will, most certainly be negatively impacted with
contaminated saltwater intrusion from both Santa Monica Bay and toxic effluent from the Ballona Channel- once Ballona's levees are demolished and Ballona is dug out below sea level. 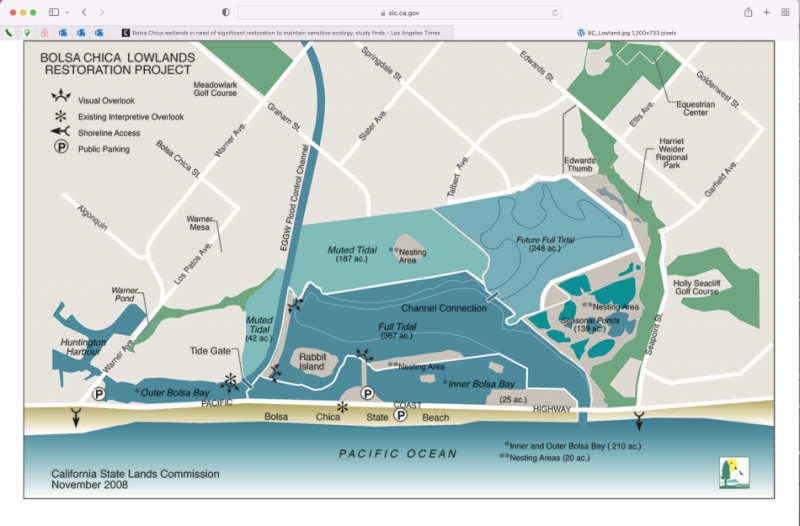 New 200-ft wide, 20-30 ft high perimeter levees included in the 'Plan' are engineered to Army Corps of Engineers standards which require mowed grass surfacing for visual inspection for vector control against burrowing animals.  The miles of bikeways and foot paths already in existence will be destroyed to make way for new pedestrian accessways atop the new non habitable levees that will hover over roadways as if within canyons and block any views of Ballona.
SEE COMMENTS ON 3.24.22 Coastal Conservancy (Conservancy) Board Meeting Item 10.
LINK:
Neither CDFW nor the Conservancy are listening.

The March 24, 2022 Meeting, Board Members, who approved a $500,000 grant to hire contractors to achieve 'communications' between the public and the Conservancy also made sure that the public, in attendance, would not be heard--at first granting 2 minutes each for public comment but quickly changing their minds turning it into only one minute.  A commenter called their behavior, 'gas lighting' stating, "Let's be honest, let's be real. You want the feedback you want. You have an agenda, and it is truly gaslighting to talk of seeking community input when you really just want a community stamp of approval for your agenda.  It's so cynical, it breaks my heart."  The last commenter stating, "This is not a process, this is doing what you want to do. ... So, I'm asking each and every one of you to resign immediately."  They couldn't be bothered with communication.  And, certainly even written comment submitted days earlier, received no response whatsoever.  https://www.youtube.com/watch?v=OeHB76eRRHs  Item 10, Starting at 1:54:44.

Ballona Ecological Reserve was acquired for the Purpose of protecting its freshwater resources, its saltmarsh habitat, its endangered species --with attention to Belding's Savannah Sparrows and their pickleweed habitat, and protection for its wildlife corridors.  All of this, legally established in 2005 under Title 14, Section 630 with Ballona having these conditions as Ballona’s own specific reasons for acquisition.  And, that per the CDFW Ca. Code of Regulations 1745, any and all agencies and/or non profit agreements or contracts shall abide by the Purpose for which the Ecological Reserve was acquired.  The Ca. Fish & Game Commissioners approved Ballona in 2005 as a Terrestrial, NonMarine Ecological Reserve, yet now, both the Conservancy and the Department of Fish & Wildlife are acting inconsistently with Ballona's legal standing and are both dodging any response to these issues.
California Regulatory Notice Register 2005, Volume No. 20-Z, Starting on page 663 Ballona Wetlands Ecological Reserve https://www.dhcs.ca.gov/services/medi-cal/Documents/AB1629/ZREG/ZREG 20-Z_5.20.05_notice.pdf
The very reasons for which Ballona was acquired are slated for near, mid and long term destruction according to the Final Impact Report's own modeling study which shows that Ballona's rare salt pannes and Belding's Savannah Sparrow 's salt marsh habitat will deteriorate into mudflats and open water.  Bolsa Chica serves not only as a Red Flag Warning but provides proof of an experiment gone wrong, with its saltmarsh habitat destroyed via succumbing to open saltwater and mudflats due to its engineered tidal inlet.
Please review  the Bolsa Chica Lowlands Restoration Project Sustainable Alternatives Study Final Report.
We have the time and we have the proof of need for a natural alternative for Ballona Wetlands Ecological Reserve.  We have a consensus building model, as was utilized for the Owens Valley Dust Control Project--Habitat Restoration Plan.  Dr. Margot Griswold was an intrinsic part of this collaborative, consensus building partnership which resulted in an exceptionally positive habitat outcome and protection to the environment and the public.  Ballona is a far smaller project with far fewer variables and is an Ecological Reserve that is sustainable via its own natural freshwater resources.
https://saveballona.org/ballona-wetlands-ecological-reserve-full-freshwa...
The 2021 released study, Bolsa Chica Lowlands Restoration Project Sustainable Alternatives Study Final Report, clearly demonstrates the need to carefully assess each and every 'restoration' project for its individual and unique history and natural resources.
Bolsa Chica delivers the results of 15 years of experimentation in opening wetland/upland habitats to full tidal inundation via the opening of a tidal inlet in 2006 in tandem with various other 'phased engineering' attempts that ultimately have given rise to the demise of coastal salt marsh habitat, an unsustainable dredging project and a loss of targeted endangered species survival. Already, the loss of coastal salt marsh habitat has occurred via an inability to control the saltwater influences, resulting in open water habitat and mud flats.  Now, Sea Level Rise will also be a contributing factor to the habitat and wildlife destruction at Bolsa Chica which now requires immediate remediation for its 'restoration'.
BOLSA CHICA WETLANDS IN NEED OF SIGNIFICANT RESTORATION TO MAINTAIN SENSITIVE ECOLOGY, STUDY FINDS https://www.latimes.com/socal/daily-pilot/news/story/2022-03-06/bolsa-ch... 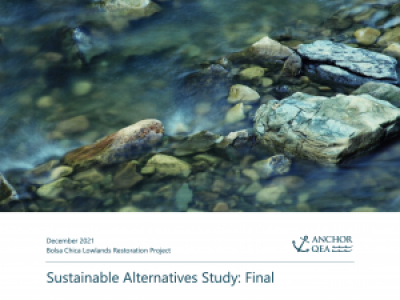