Dear Governor Newsom - Grassroots Coalition shares your concern for California's dwindling freshwater.
What about Ballona?
Playa Vista, in West L A, built the biggest residential & commercial development in the United States on top of a 400 acre portion of Ballona Wetlands.  They drain millions of gallons of Ballona's freshwater to the Pacific Ocean
and our sanitary sewer annually.
Help hold Playa Vista's Ballona Wetlands Conservancy accountable. 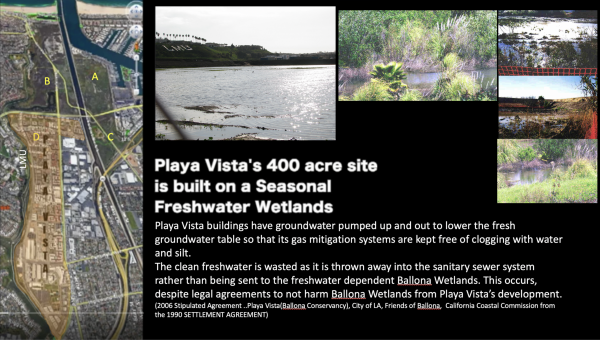 2022 https://saveballona.org/2022-update-saving-ballona-wetlands-ecological-r...
2022 https://saveballona.org/entire-28-min-zoom-recording-santa-monica-gsa-me...
The Ballona Wetlands Ecological Reserve is a
Title 14, 630 Ecological Reserve Registered with the State as a Terrestrial / Non-Marine Ecological Reserve
with specific Purposes and Goals: Protecting its freshwater resources, endangered species and wildlife corridors.
Ballona is threatened with:
1. Saltwater contamination;  2. Playa Vista's ongoing fresh ground and surface water diversion and throw away to the sea and sanitation;
3. Playa Vista's wasteful discharge has not been contemplated or addressed in the Santa Monica Groundwater Sustainability Plan (GSP);
4. Lack of protection of the underlying freshwater aquifers, classified by the Los Angeles Regional Water Quality Control Board as Potential Drinking Water and Drinking Water;
5) California Department of Fish & Wildlife plans to convert Ballona Wetlands into a fully tidal saltwater bay which is inconsistent with the purpose of Ballona's acquisition.
___________________________

Bolstering conservation efforts, the proclamation enables the State Water Resources Control Board to ban wasteful water practices, including the use of potable water for washing sidewalks and driveways. The Governor issued an executive order in July calling on Californians to voluntarily reduce water use by 15 percent compared to 2020 to protect water reserves and complement local conservation mandates. The Governor’s action today comes as the Board reports that in August, California reduced urban water use by 5 percent compared to 2020.

“As the western U.S. faces a potential third year of drought, it’s critical that Californians across the state redouble our efforts to save water in every way possible,” said Governor Newsom. “With historic investments and urgent action, the state is moving to protect our communities, businesses and ecosystems from the immediate impacts of the drought emergency while building long-term water resilience to help the state meet the challenge of climate change impacts making droughts more common and more severe.”

A copy of today’s proclamation can be found here.

The proclamation adds the eight counties not previously included in the drought state of emergency: Imperial, Los Angeles, Orange, Riverside, San Bernardino, San Diego, San Francisco and Ventura. In addition, the proclamation requires local water suppliers to implement water shortage contingency plans that are responsive to local conditions and prepare for the possibility of a third dry year.

Expanding the Save Our Water initiative, a critical resource during the last drought, California has launched robust water conservation public education campaigns in partnership with stakeholders, including public water agencies. Statewide per capita residential water use declined 21 percent between 2013 and 2016 and as of 2020, the urban sector is using approximately 16 percent less on average statewide than in 2013. The Administration will continue to monitor the evolving drought conditions and evaluate all tools available to respond in real-time.

California is experiencing its worst drought since the late 1800s, as measured by both lack of precipitation and high temperatures. August 2021 was the driest and hottest August on record since reporting began and the water year that ended last month was the second driest on record. Today’s proclamation authorizes the Governor’s Office of Emergency Services to provide assistance and funding under the California Disaster Assistance Act to support the emergency response and delivery of drinking water and water for public health and safety.

More information on the state’s response to the drought and informational resources available to the public are available at https://drought.ca.gov/.