Grassroots Coalition believes, due to information retrieved via Public Record Act requests and via Freedom of Information Act requests that the Ballona Wetlands Conservancy is a wholly private business of Playa Vista - Playa Capital LLC/ Brookfield and as such, these private interests controlling state of California public trust lands, namely- the Ballona Wetlands property stewarded by the State Lands Commission and leased by CDFW is an activity and control process  that was initiated under a false pretense by Playa Capital LLC.  Transparency and accountability to the public  needs to occur.  GC is requesting that all agencies currently engaged in any fashion with the Ballona Wetlands Conservancy, provide feedback and accountability to the public regarding the matters of oversight of this public trust land—Ballona Wetlands.

Thank you and GC looks forward to dialogue between agencies and the public on this matter,

Instead, we have learned via Public Record Act requests and other record searches that the Ballona Wetlands Conservancy is a private business of Playa Capital LLC which now includes Brookfield— owners of the Playa Vista Project.

We have learned that:

Therefore, the State Lands Commission’s relationship to the Conservancy remains a very important question to the public regarding the oversight of State Lands property (public trust lands) that are currently and in the past being controlled by private interests—namely Playa Capital LLC/ Brookfield for their own private interests and needs.

Monitoring of the State Lands property (public trust lands) has been ongoing by the private interests—Playa Capital LLC/Brookfield.  The private development business’s monitoring of the public trust lands has failed to include oilfield gas migration and leaking oil well (University City Syndicate) information that is occurring onsite to which Playa Capital LLC remains the last operator of University City Syndicate.  Playa Capital LLC’s abandonment of this well has not been monitored for its subsequent failure and ongoing leakage.

Vector Control citations to the Ballona Conservancy cite the Ballona Wetlands Conservancy’s lack of ‘clear line of authority’ during Vector Control’s attempts, to garner action to end the overabundance of mosquito outbreaks in the catch basin and adjacent system portion known as the Riparian Corridor.  (note pages of ppt attached)

Furthermore, CDFW gave a Notice of Streambed Violation to the Ballona Wetland Conservancy, for its development activities both in response to Vector Control as well as for illegal road building in endangered species area of their Streambed Agreement.  (note ppt pages attached)

The roadbuilding activities have been cited by LA Building & Safety (LADBS) as having been done without permitting.  The unpermitted roadbuilding by the Ballona Conservancy is an ongoing matter with LADBS.  (note ppt attached images )

Since the acquisition portions of the Ballona Wetlands by State Lands Commission include the Playa Vista catch basin and the EXTENDED WETLAND PORTION, and its subsequent leasing to the California Dept.  of Fish & Wildlife (wherein the deed cites roughly, that no development will occur until the restoration plan is implemented); there has been development inserted into the Extended Wetland Portion which is outside the Playa Vista phase 1 approvals by both the City of LA and the California Coastal Commission (CDP 5-91-463) and the Army Corps permitting for the same which is included as ‘description’ within CDP 5-91-463.

This development can be viewed in the attached images.  The SQUARE DRAIN is shown on the second slide page.  This drain is located in the Extended Wetland area and hence outside any approvals provided for the Phase 1, Playa Vista portion of the ‘freshwater marsh’.

A drainage device was inserted into the Extended Wetland Portion in 2009, per GOOGLE EARTH MAPPING that reveals the insertion which was not in place prior to this time frame.  (see ppt images)

Grassroots Coalition requests response from State Lands Commission regarding this matter of great public concern and importance.  (PPT slides included below are a portion of the PPT provided to the California Coastal Commission.)

Thank you for your help in providing transparency and accountability regarding these issues, 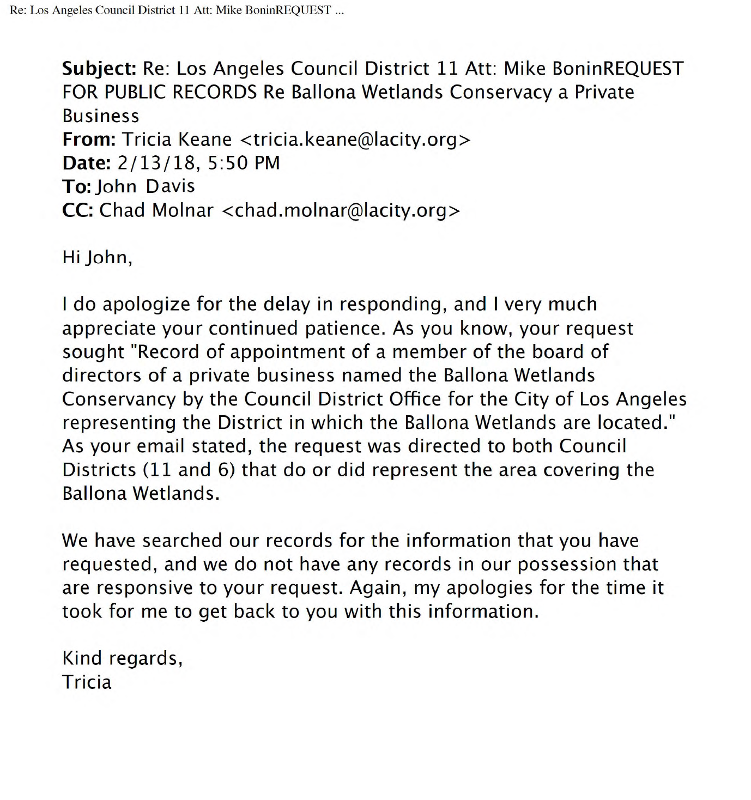 Click Slide 1 Image for Full Size in New Window, or scroll down for Zoomed Views below. 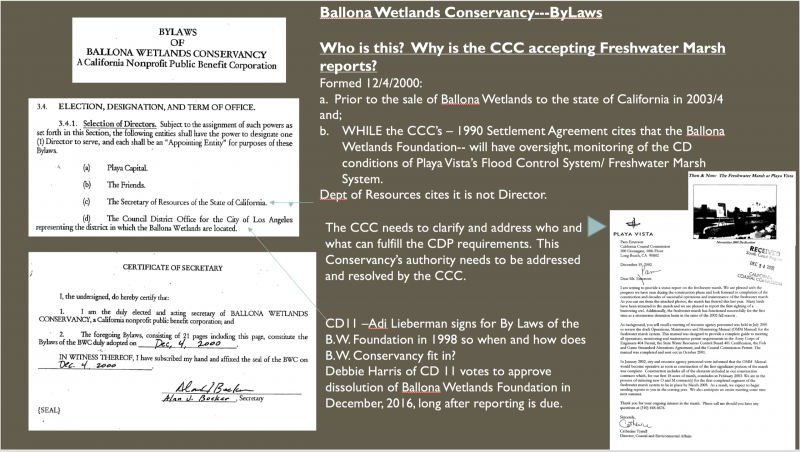 Zoomed snippet of above slide image: 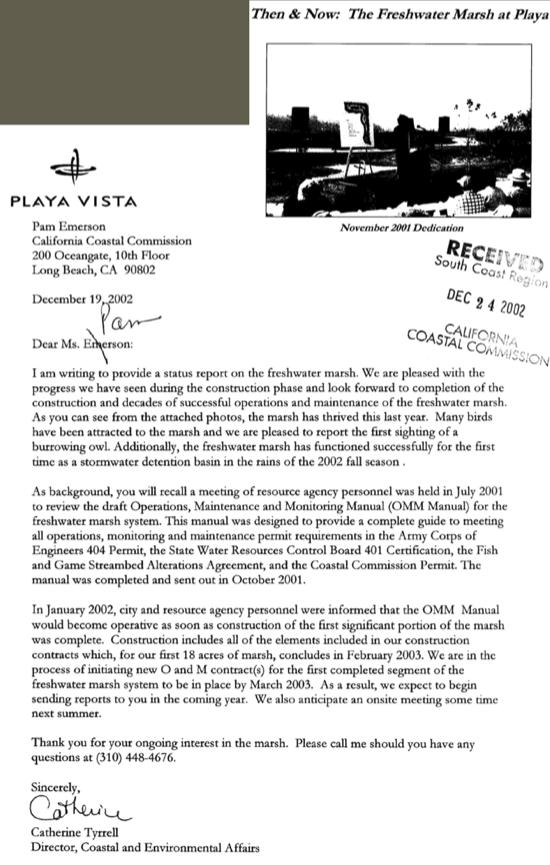 Click Slide 2 for full size image in a new window, or scroll down for Zoomed Views below. 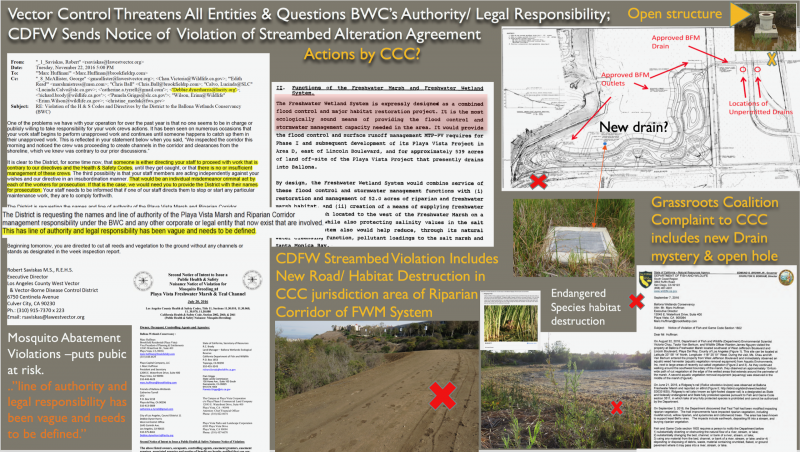 Zoomed Views of above slide image 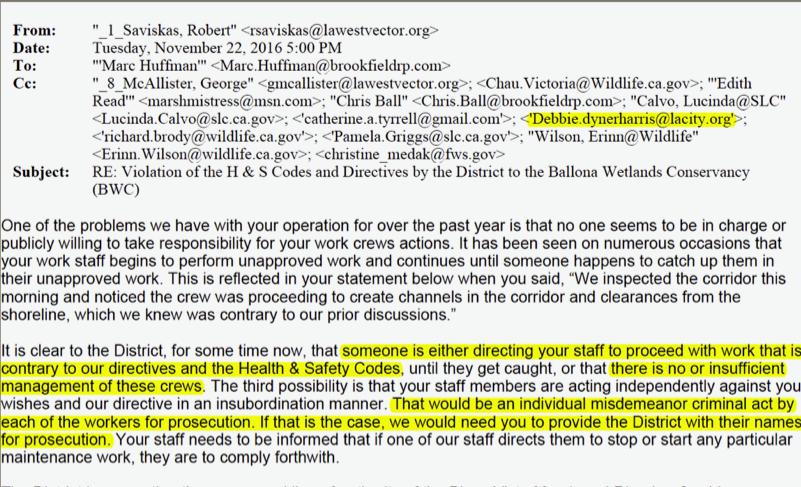 Following up on your email today, I’ve attached a copy of the Bylaws of the Ballona Wetlands Conservancy to help clarify the State Lands Commission’s relationship to the Conservancy.

The State Lands Commission is not part of the Ballona Wetlands Conservancy.

Instead, the Conservancy is overseen by a four-member Board of Directors, including one representative each from:
·        the State (from the Department of Fish and Wildlife),
·        the City of Los Angeles Council District 11,
·        the Friends of the Ballona Wetlands, and
·        Brookfield (the successor-in-interest to Playa Capital Company, LLC).

This management structure is described in the attached Bylaws on page 5 (page 8 of the PDF).

I will check back in with you on Monday regarding the status of your Public Records Act request.