In August, 2018 GC sent this letter.
To: California Coastal Commissioners & Director & Staff; ;CDFW
cc:  State Lands Commission; LARWQCB; Legislators; USACE
Re: Non-adherence by Staff for Removal of Illegal Playa Vista Drains
Staff of the California Coastal Commission (CCC) did not adhere to Coastal Commissioners' Motion 12.14.18 to issue Coastal Development Permit 5-17-0253 for Removal of Illegal Playa Vista Drains to California Department of Fish & Wildlife (CDFW), as agreed to at the California Coastal Commission (CCC) Meeting, Dana Point, California in December 2017.
Instead, Staff created the option to not remove the Drains, contrary to the Commissioners’ unanimous vote to remove the unpermitted Ballona Wetlands Drains, resulting in CDFW ;not providing an Application to remove the drains.
Videos of December 2017 CCC Meeting of what was unanimously voted:
https://youtu.be/ZOLhyaVUJ84 Commissioners Speak
https://youtu.be/hjsN4iSryIg    CCC Attorney Peterson Reads Motion
In addition, the CAPPING torch welding advocated by CDFW (reciting Playa Vista’s consultant) while ;"publicly" testifying to Commissioners that, Grassroots Coalition was wrong about the methane gas hazards being present, later reversed themselves, and agreed the gas hazards were present at the Drains in a "private" email (see internal email attached). [* And see 4) below.]
California Coastal Commission—Enforcement Program Overview
"The mission of the Commission’s enforcement program is to protect coastal resources by: assuring that proposed development projects are consistent with the Coastal Act, which is accomplished via the permit review process required by the Coastal Act; that required coastal development permits (CDPs) are obtained for all development in the Coastal Zone; that all terms and conditions of CDPs are complied with; to generally deter and address violations of the Coastal Act; and to work with local governments to assist them in enforcing coastal protection policies.”   [underlining added]
- Quote from https://www.coastal.ca.gov/enforcement/enforcement_program.pdf
GRASSROOTS COALITION -- REQUEST FOR CALIFORNIA COASTAL COMMISSION ENFORCEMENT REVIEW:
1.  GC requests review pertaining to Violations of Conditions cited in CDP 5-17-0253.
CAPPING of unpermitted drain, was conducted in a manner which involves alleged violations of Permit 5-17-0253 Conditions and; non-adherence to Commissioner’s 12/14/17 Motion for removal of the unpermitted Drains; untimely Coastal Development Permit (CDP) APPLICATION 5-18-0554; request review for conflict of interest in Application and performance of Conditions.
2.  GC requests review under the provisions of Section 30812 of the Public Resource Code, for the Commission to record a “Notice of Violation” (NOVA) on the title to the public property - Ballona Wetlands Ecological Reserve - (CDFW stewardship) that was developed in violation of the Coastal Act,   by CCC acknowledged unpermitted Drainage Devices development that has harmed the Ballona Wetlands Ecological Reserve.
COASTAL DEVELOPMENT PERMIT 5-17-0253 INCLUDES STAFF LANGUAGE IN CONFLICT WITH UNANIMOUS COMMISSIONER APPROVED MOTION at the December Coastal Commission Meeting.
As recorded, the 12/14/17 CCC Dana Point Meeting yielded a Unanimous Commissioners' YES VOTE to Remove the Illegal Drains.  Mr Pederson’s reads the Commissioners' Order:  Video: https://youtu.be/hjsN4iSryIg
Commissioners Peskin and Brownsey Re: Unpermitted Drains/Ballona Wetlands CCC Dana Point Video: https://youtu.be/ZOLhyaVUJ84
Despite Mr. Pederson’s citation of the Motion to Remove the Drains accompanied with a unanimous commissioner yes vote for removal of the Drains, CCC Staff’s written CD Permit 5-17-0253 CREATED ANOTHER OPTION for CDFW, namely to "appropriately abandon the remaining unpermitted pipes and associated development..."
The 1/11/18 CDP cites, “Within 180 days of the date of approval of Coastal Development Permit No. 5-17-0253, a coastal development permit application shall be submitted to the Commission for removal or appropriate abandonment of the remaining unpermitted pipes and associated development, to be carried out within one year of Commission action on that application.”
The Application filed by CDFW (June 11, 2018) contains no plans for removal of the unpermitted drains. The Application is only for abandonment in place and cites to the removal being done in the future as a restoration option for Ballona.
Grassroots Coalition (GC), directly after the December CCC Meeting requested the Adopted Findings of the Item.  GC was told by CCC Staff that no Adopted Findings existed yet, but that GC would be provided with them when available.
GC has since placed a Public Record Act request for the Adopted Findings at issue and has received no response.
The Applicant, Permittee-CDFW, according to CDFW Public Record Act (PRA) responses, has not contracted, paid, or created any formal agreements with anyone to perform studies used in their Applications or the actual work of CAPPING the Unpermitted Drains. (*See PRA & Response below & at bottom of letter)  And, no contracts, formal agreements, payments have been made for the current Application information provided to Coastal Commission Staff.  Both Application information and Work Performed for CDP 5-17-0253 were provided by Playa Capital LLC/Brookfield leadership and their private consultants according to emails garnered via PRAs.  The current Application 5-18-0554 information has been provided by Playa Capital LLC/ Brookfield without any formal agreements, payments or contracts, according to PRA responses from the Dept. of Fish & Wildlife.
GC filed a Public Record Act Request 18-02-057 on 2.14.18.
CDFW responded on June 7, 2018 with the CDP below:
Download Full Size, Printable PDF of CDP 5-17-0253 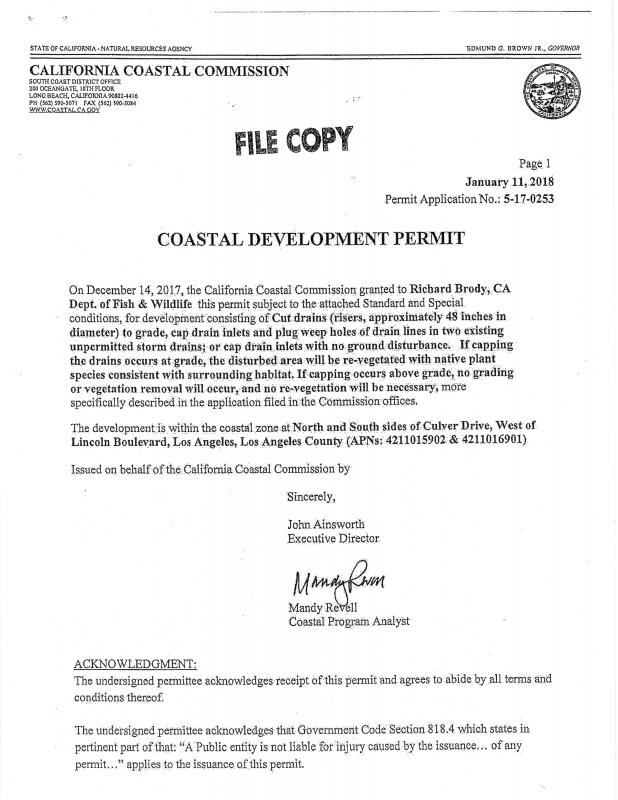 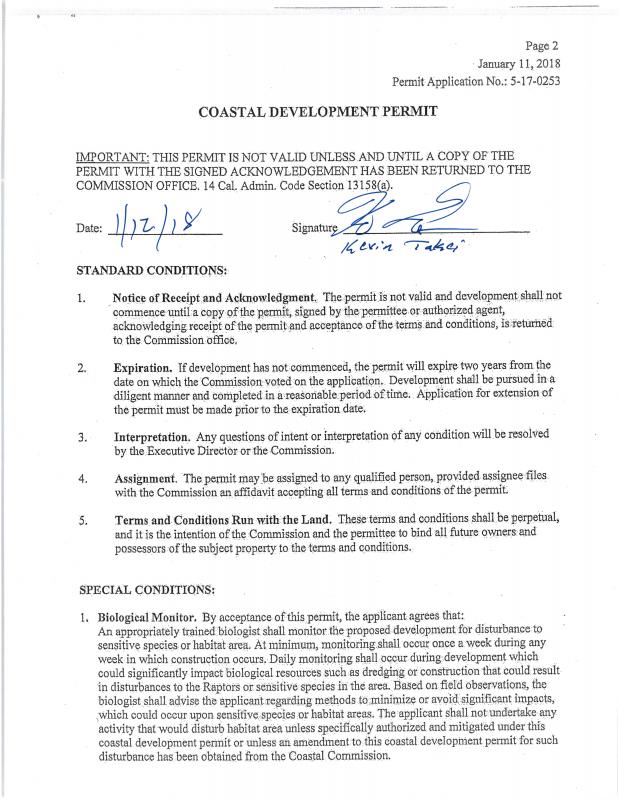 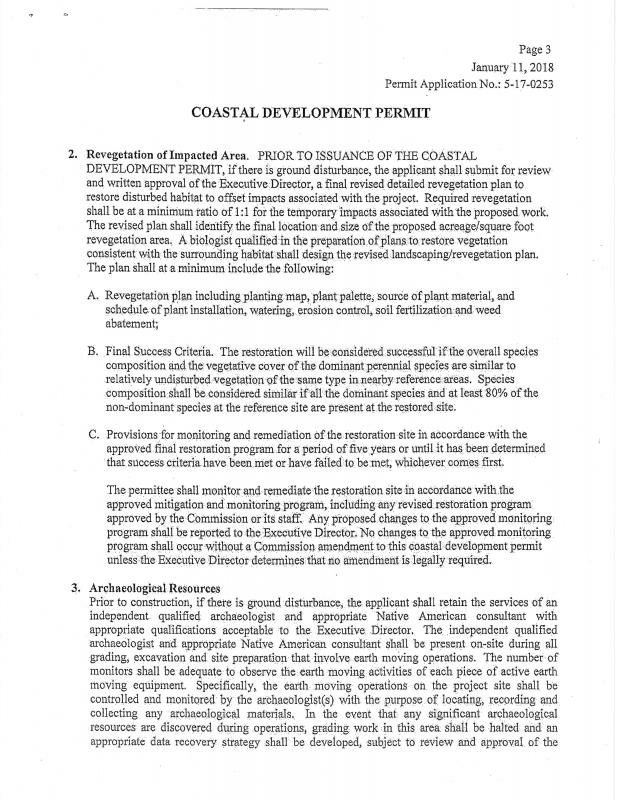 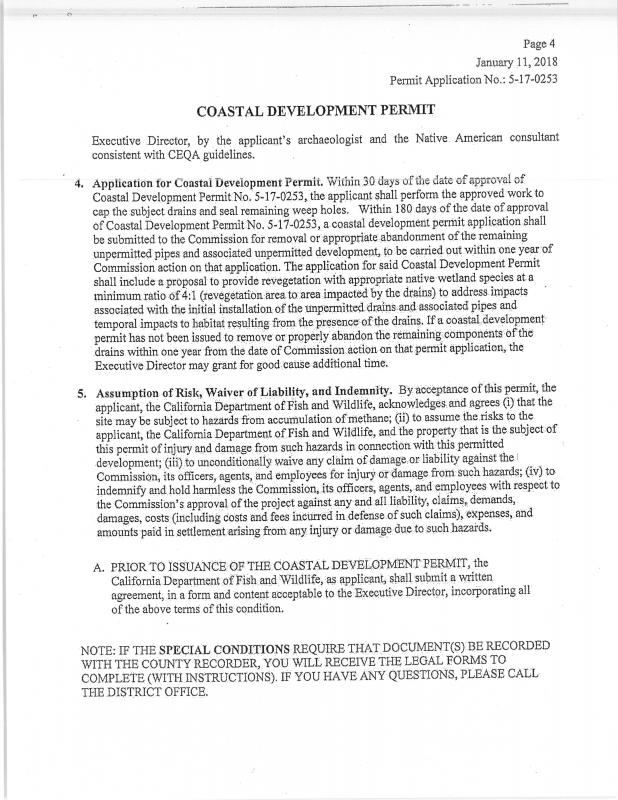 The Coastal Development Permit CDP 5-17-0253 is signed by APPLICANT CDFW, representative, Kevin Takei.  The Applicant, CDFW thereby has signed an agreement that incorporates all of the conditions of the Permit.  No other party signed the agreement to fulfill the conditions/obligations and liabilities of Permit 5-17-0253.
- Condition 4 of CDP 5-17-0253 requires that an affidavit be signed by any other party assigned the Permit and, that party signs the affidavit to signify its agreement to the Conditions of CDP 5-17-0253.
12/14/17

- No affidavit assigning the Permit to a third party exists according to Grassroots Coalition’s Public Record Act response for such from the California Coastal Commission.
Therefore, Grassroots Coalition alleges that a Violation of Standard Condition 4. of Permit 5-17-0253 has occurred and requests an investigation by CCC Enforcement.
- Does the CCC Staff & CDFW consider the opinions, reports, physical work performance regarding the Unpermitted Drains a donation or gift from the third party Playa Capital LLC/Brookfield (developers of Playa Vista)?  Such a donation or gift creates, at least, the appearance the donor is seeking to influence an official action.
The Playa Vista developers are not neutral parties to the CDP issues of Ballona Wetlands Ecological Reserve.  Playa Capital LLC is a Coastal Act violator, according to the California Coastal Commission, for its harmful drainage of Ballona Wetlands via its construction  and use of two unpermitted drainage wells, in place for over twenty years. Playa Capital LLC/Brookfield have development agendas, pertaining to flood control needs and gas migration hazards & mitigation, that create, at least, the appearance of conflict of interest regarding the restoration of Ballona Wetlands Ecological Reserve and maintenance of the Freshwater Marsh System.
1. The identity of who actually performed any Capping of the Unpermitted Drains and exactly what was done, remains unknown despite PRA requests for this information from both CDFW and CCC Staff.
2. CDFW, the APPLICANT, according to PRA responses, did not pay for, did not have any contracts or formal agreements made with any party to perform any work pertaining to the Capping of the Unpermitted Drains.
3. Only  internal emails retrieved via PRA requests to CDFW and the CCC demonstrate that CDFW & CCC Staff discussed with Playa Capital LLC/Brookfield leadership and contractors, a vague how-to for work on the Unpermitted Drains.
4. What is known is, that contrary to the torch welding advocated by CDFW to Commissioners at the Dec. 2017 Meeting, some sort of epoxy was used to seal off the drains due to the acknowledgement by Playa Capital llc/Brookfield representatives and CDFW STAFF & CCC STAFF that methane hazards exist at the site that should preclude the use of torch welding.
(Note- Application 5-18-0554 reiterates CDFW’s assertion (via the attached reports provided by Playa Capital LLC/Brookfield contractors) that no methane/h2s hazards exist at the site.)
Grassroots Coalition alleges the Violation of Permit CDP 5-17-0253.  Special Condition 1. Biological Monitor.

None of the CDFW or CCC Public Record Act responses demonstrate that any biological monitor was present onsite during the Capping of the Unpermitted Drains.  No contracts, formal agreements exist per the PRA given to CDFW from Grassroots Coalition for such information. 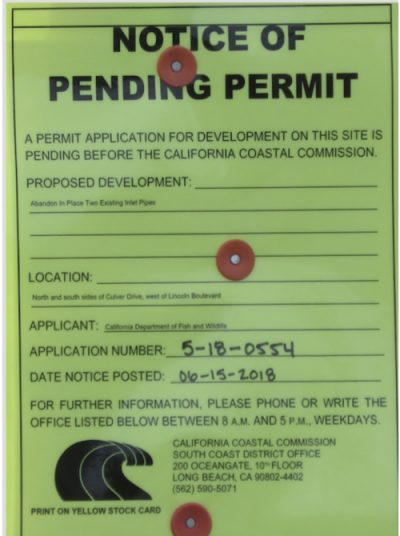 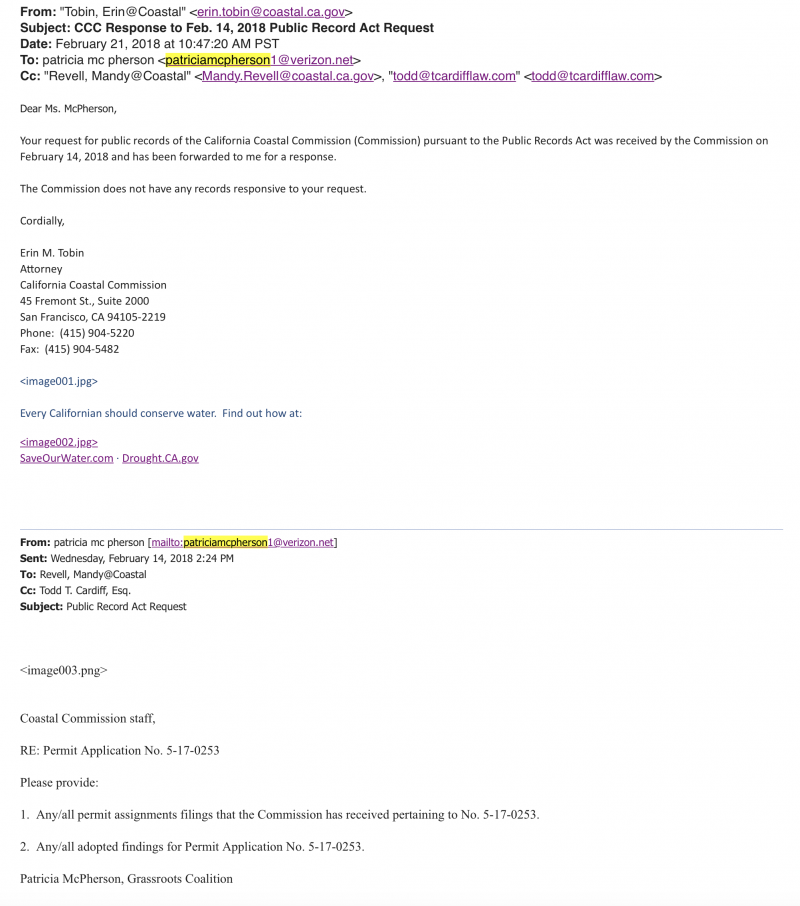 The response to the 2/14/18 PRA from the CCC is that there are no responsive documents.
The lack of responsive documents reveals that no affidavit as is required in #4. of the Permit 5-17-0253 exists.  Playa Vista’s contractors, according to the CDFW emails below, worked in the Coastal Zone and worked upon the unpermitted Drains, at least as shown in the accompanying photos.
However, no other entity other than the permitted entity was approved for performing the work on the unpermitted drains, unless Condition #4 was met according to the Permit.  Condition #4 was allegedly not met since no affidavit was filed with the Commission to fulfill Condition #4.

Standard Condition #4.
"Assignment.  The permit may be assigned to any qualified person, provided assignee files with the Commission an affidavit accepting all terms and conditions of the permit."

15.  Breech of Permit
CCC staff and CDFW staff provide at least, the appearance -- of failure to act independently on behalf of the public’s interest within Ballona Wetlands Ecological Reserve.
Both CCC and CDFW appear to advocate on behalf of a third party - Playa Capital LLC/Brookfield (Playa Vista developers) rather than perform their duties on behalf of the public and the environment.
Please provide response to this REQUEST and consider this LETTER as part of GC’s exhaustion of its administrative remedy.
Thank you for your time spent in review of these matters of great public concern,
Patricia McPherson, Grassroots Coalition