A natural gas storage well sent flames 100 feet high until they were snuffed out after 10 days. Methane continued to vent from the site, but Porter Ranch residents were too far away to notice.

Today no flames mark the gas pouring out of the ground near the northwest San Fernando Valley community, but the sense of disaster is more acute and repairs will take longer.

Porter Ranch lies closer to the gas field with the nearest homes about a mile from a well that began leaking Oct. 23. Fumes are pouring into the community, and thousands of residents have been relocated to temporary housing.

Emergency crews have returned, but the work is slow. Southern California Gas Co. estimates that crews won't plug the leak at the Aliso Canyon Underground Storage Facility until at least late February, possibly until late March.

Critics ask why the process can't be quicker. The answer lies in the dynamics of this particular leak.

For better and for worse, the geology of the Santa Susana Mountains is well suited for both oil drilling and gas storage. Underground sedimentary layers, compressed over millions of years, arch upward, creating subterranean folds like upside-down bowls that held oil deposits.

Oil production started here in the late 1930s, and in 1971, as wells began to run dry, SoCal Gas bid $26.2 million to take over portions of the field. Today more than 115 active gas storage wells are scattered across nearly five square miles.

Few man-made structures could hold as much gas as this natural repository, which is one of the largest in the country, measuring nearly one cubic mile at a depth of a mile and a half. Other companies still drill for oil at the site but operate at different depths.

Gas, piped in from as far away as Canada, is held here for distribution to nearly 22 million customers in the Los Angeles Basin.

The damaged well in Aliso Canyon, known as SS-25 for Standard Sesnon 25, extends down 8,748 feet, reaching and penetrating a layer of nonporous rock, the capstone, that keeps the stored gas from escaping. Unless there is a breach in the pipes.

SoCal Gas tried to plug the well the day after discovering the leak by injecting it with brine and mud, a mixture of water, potassium chloride and bentonite clay, said Jason Marshall, chief deputy director of the California Department of Conservation, which regulates and oversees the state's oil, natural gas and geothermal wells.

But approximately 470 feet down, the injections were blocked by an ice plug formed by the bonding of water molecules and methane. Boots & Coots Services, a Texas company that specializes in well blowouts, recommended dissolving the plug by injecting the well with ethylene glycol, antifreeze.

The company, a subsidiary of Halliburton Co., was founded by Asger "Boots" Hansen and Edward "Coots" Matthews, both of whom worked with the legendary Paul "Red" Adair, the oil well firefighter whose company helped put out the Aliso Canyon fires in 1968 and 1975.

The ethylene glycol was applied through special tubing that arrived Nov. 1 from a drilling platform off the coast of Louisiana. It worked.

With the ice barrier out of the way, crews resumed injections from the well head into the pipes. But the pressure of the escaping gas, measured on average at 2,700 pounds per square inch, was greater than the pressure of the thick cocktail being pushed down.

After seven attempts, Marshall said, engineers began to worry that if they pushed too hard with the mud cocktail, they might rupture the pipes, causing an even greater leak.

SoCal Gas decided to drill two relief wells to intersect SS-25 at its juncture with the capstone. The new wells would feature larger and less obstructed piping for the insertion of the brine and mud. The drawback is that the drilling will take months.

SS-25 is located on a ridgeline north of Oak Mountain and west of Limekiln Canyon. Reached mostly by single-track roads, the work site is a small parking lot. 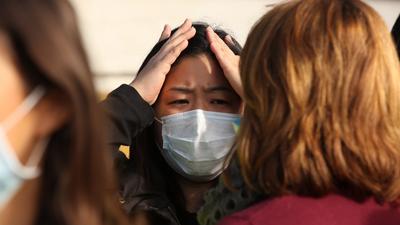 Crews expect to start drilling the second well by Jan. 20, Marshall said, once site preparations are complete. The second well is being drilled in the event that the first one misses its target or is unable to deliver enough brine and mud to stop the leak.

Looming over Porter 39a is a drill rig with a 150-foot-tall mast. The drill bit churns at 100 revolutions a minute, with injected water carrying the cuttings to the surface.

Its trajectory is to approach SS-25 at an angle, then parallel the pipe for nearly 6,000 feet before angling into the concrete casing where the pipe meets the capstone.

Trying to intercept the 7-inch pipe at a depth of a mile and a half "is a little like trying to hit a quarter-inch target from the distance of a football field," Marshall said.

To calculate direction and distances between the relief well and SS-25, crews lower magnetic sensors into the relief well that transmit the data to the surface. The process is time-consuming.

The readings can be taken only when all of the drill pipe has been removed; it is drawn out of the well in 90-foot sections that break down into more manageable 30-foot sections. For a well that's a mile and a half deep, SoCal Gas must schedule a day for pulling out the pipe and a day for sending down the sensors.

Neither the cause nor the exact location of the leak has been identified, Marshall said. But he suspects that the age of the well might have played a role. SS-25 went into operation as an oil well on Feb. 25, 1954, according to records kept by the Conservation Department. The well was converted to a gas storage well in 1973 and upgraded in 1979.

Its pipes are 61 years old, and in the course of channeling both oil and gas, the pipes have also carried water, which can compromise the integrity of the pipe.

Marshall said engineers speculate that the leak is coming from a hole in a 7-inch-diameter pipe about 500 feet below the surface.

The pipe is surrounded by a cavity and then a cement casing. Engineers think the gas leaks from the pipe, fills the cavity and then escapes at a lower depth where the cement casing ends, at about 990 feet. The engineers surmise that the gas forces its way through the soil to the surface.

The wells in the Aliso Field are inspected annually, and if an anomaly is found — a temperature drop indicating a leak — they are killed, said Rodger Schwecke, vice president for customer solutions for SoCal Gas.

SS-25 was last inspected Oct. 21, 2014, according to documents posted on the Department of Conservation website.

Schwecke would not speculate about the cause of the leak. But he said "corrosion is always a concern when dealing with pipelines."

Earth movement is just a slim possibility. The field went through the 1994 Northridge earthquake without damage, he said.

As the relief wells are drilled, SoCal Gas has succeeded in cutting the escaping fumes in half by reducing the pressure in the underground reservoir. The company has drawn down levels of gas, using it to supply customers and injecting it into other fields, while not replenishing the supply.

Easing the pressure not only reduces the emissions reaching Porter Ranch but also makes killing the damaged well easier. At its peak on Nov. 28, the well blew nearly 60,000 kilograms of methane an hour into the atmosphere. By Dec. 22, that rate had dropped to 30,300, according to the state's Air Resources Board.

The goal is to reduce the pressure from 2,700 pounds per square inch to 1,000 to 1,200 pounds before the relief wells reach their target, Marshall said.

Once the leak is stopped, SoCal Gas, the Department of Conservation and the Public Utilities Commission will look for its cause. Marshall believes the answers will affect industry practices in the future.

"We need to ask questions about well construction and operation," Marshall said. "This well was constructed before modern standards" were in place. Regulators also need to consider increasing the frequency of inspections, he said.

"There are going to be changes in how gas is stored," he said.