Lessons Learned from Owens Applicable to Ballona - Construction of the of the Los Angeles Department of Water and Power (LADWP) 233 Mile Aqueduct began in 1908. In 1913 the Aqueduct began bringing freshwater to Los Angeles from Owens Lake. LADWP's William Mullholland, civil engineer, provided the leadership and design. Owens Valley farms failed due to over-pumping of their freshwater. The St. Francis Dam Disaster collapsed killing over 450 people in 1928. The Owens Lake becoming a dust bowl, creating huge, life threatening dust storms. Wildlife suffered. About ten year ago, stakeholders, agencies and the LADWP agreed something drastic needed to be done to correct the Dust Bowl which was created by the Aqueduct Project. 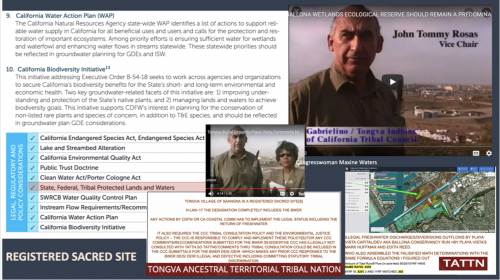 2. The State Coastal Conservancy Commission (Conservancy) pursued and promoted its own preferred outcome for Ballona's restoration as 'restoring the ebb and flow of the ocean', and conversion of Ballona into a fully tidal saltwater bay. This comports with the definition of a Title 14, Section 632 Marine Preserve which was never approved by the Fish and Game Commission and which violates the purpose and goals of Ballona's acquisition. It is inconsistent with CEQA protocol and Fish and Game Code 1745.
In 2005 Fish & Game Commission approved and inducted BWER as a Title 14, Section 630 Terrestrial, Nonmarine Ecological Reserve system having Ballona specific Purpose and Goals of Ballona acquisition in 2003. BWER was approved and registered by Office of Administrative Law by the California Fish & Game Commission--the Codes, Rules and Regulations branch of California Natural Resources.  BWER is not by definition a Title 14, Section 632.

The Ballona Wetlands Ecological Reserve, Final Environmental Impact Report (FEIR) must be rewritten to acknowledge that Ballona is a Title 14, NonMarine Section 630 Ecological Reserve. It must have an Hydrology Analysis and a Land Management Plan, both are deemed necessary by current regulations.

3. The Conservancy (State Coastal Conservancy) should be functioning as an "advisory agency" that both informs the public and the agency (FISH & GAME COMMISSION) to which it is granting funds.

4. In 2017 the California Coastal Commission ruled that Playa Vista illegal, unpermitted drains must be sealed, after a lawsuit brought by Grassroots Coalition to close the two illegal drains in the BWER.

Flooding in BWER Area B after late 2021 Rains, north & south of Culver Boulevard. Illegal Drains Were Capped in 2017.

5. Since the drains were sealed, freshwater rather than being sent to the Ballona Flood Control Channel as waste water, and then to the Pacific Ocean, pools in Area B of BWER (below). Pickleweed is now abundant. 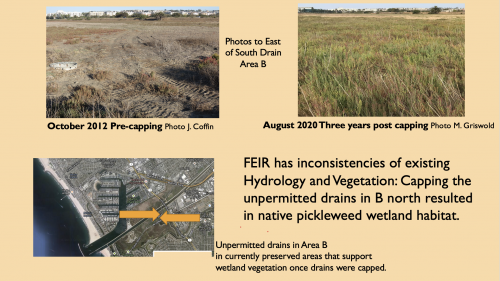 6. Ballona Wetlands Ecological Reserve (BWER) is part of the Santa Monica Subbasin under the Sustainable Groundwater Management Act (SGMA). As such it has been designated a Groundwater Dependent Ecosystem. With this designation comes additional protection of the three Ballona Freshwater Aquifers. One monitoring well, or perhaps two need to be drilled to measure Saltwater Intrusion into the Aquifers. Due to predictions of severe drought and unpredictable storms, California Governor Newsom created SGMA. 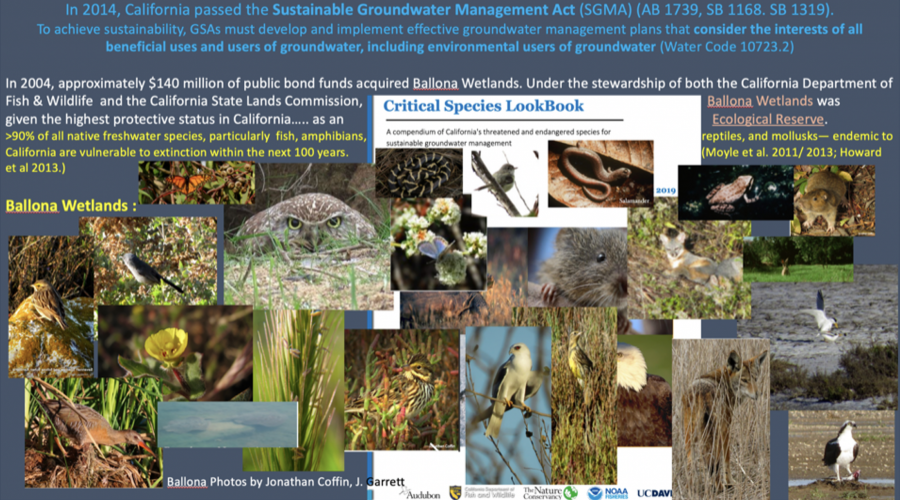