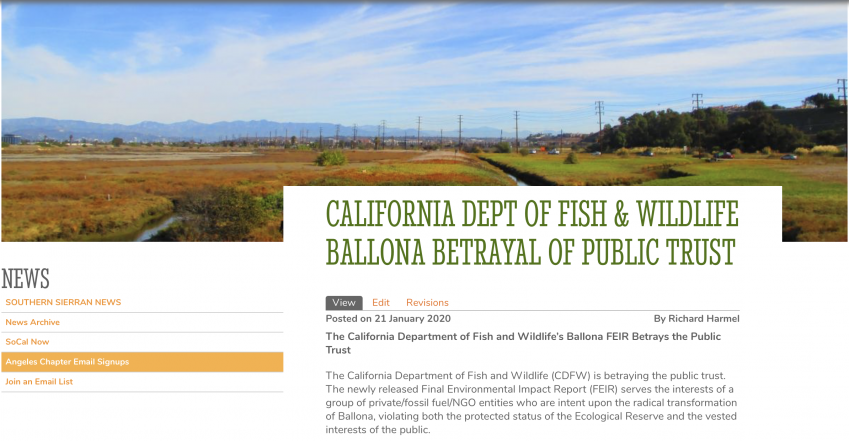 The California Department of Fish and Wildlife (CDFW) is betraying the public trust. The newly released Final Environmental Impact Report (FEIR) serves the interests of a group of private/fossil fuel/NGO entities who are intent upon the radical transformation of Ballona, violating both the protected status of the Ecological Reserve and the vested interests of the public.

The group characterizes the excavation of at least five million tons of habitat as a “restoration” by:

Anything but a restoration

This is anything but a “restoration”, squandering hundreds of millions of dollars of public money for a ten-year engineering project that ignores the impacts of climate change, on the last coastal seasonal freshwater wetlands in Los Angeles County. The CDFW has already lost in Court for having been complicit in the draining of Ballona Wetlands via illegal drains. CDFW continues to allow the freshwater rains to be diverted away from Ballona, out to sea.

CDFW is acting as a Board member on the private mega-development Playa Vista Ballona Conservancy and continues to do nothing to stop the systemic dewatering of Ballona. CDFW is allowing the walling off of Ballona from its historic freshwater underground and surface flows, s ending it off to the ocean or the sanitary sewer. CDFW is closing its eyes as the SoCal Gas Playa del Rey storage facility (SOCALGAS/PDR) systematically violates its Conditional Use Permit (CUP) agreement by allowing escaping and migrating gas to contaminate human and natural environments above, below and alongside the Ballona Wetlands Ecological Reserve.

Who stands to gain?

The CDFW’s recently released final restoration plans not only promote industrial scale bulldozing of Ballona, they spectacularly bulldoze the vested interests of the public of the State of California that legislated to protect and preserve the Ballona Wetlands Ecological Reserve. CDFW, in an attempt to cover up its lack of oversight and mismanagement, has passively gone along with plans created by the State’s financier, the California Coastal Conservancy, in tandem with a private oil/gas and Playa Vista conflicted business known as the Bay Foundation, both of whom have squandered millions of dollars of the public’s Bond money to create plans to convert Ballona into a saltwater bay.

1. Playa Capital, upstream of Ballona, is plagued with the necessity to de-water in order to maintain flood control and methane mitigation infrastructure.

2. SOCALGAS/PDR is looking to extend its storage operations for another thirty years, a feature included in the CDFW FEIR. They're also looking to be off the hook and liberated from responsibility to clean groundwater if water quality changes. SOCALGAS/PDR has already lost a contamination lawsuit to which it has to clean the groundwater to drinking water standards. In the settlement agreement, SOCALGAS/PDR acknowledges that if the water quality of the area changes, then it would no longer be responsible for decontaminating the groundwater to such a high standard. If the State floods SCG territory with saltwater, it will simultaneously eliminate drinking water standards of clean up.

3. The Port of Los Angeles, which would be scheduled to receive millions of cubic yards of dredged habitat soil from the “restoration” project in order to build up new docks, expanding the Port facility.

What happens if the dig out occurs? The Ballona Wetlands Ecological Reserve will not be restored, it will be demolished. As the climate changes and the seas rise, Ballona will be flooded with millions of acre-feet of acidified saltwater. And as superstorms flood LA, millions of gallons of stormwater runoff would be dumped onto Ballona, flooding it with contaminants, pollutants, toxic sediment, and trash.

The CDFW is gaslighting the public. How?

The CDFW has gifted Los Angeles with an FEIR that entitles an environmentally and scientifically unsustainable “Grand Saltwater Tidal Pool Park Project” that will initially cost the public $200M. This grand scheme after the State, through the California Coastal Conservancy, has already squandered the public’s Bond money that was intended to have already restored Ballona to its natural and self-sustainable identity.

The Disneyesque Grand Water Park Plan, as presented to the public, depends upon the Army Corps of Engineers pulling off this mega-engineering project. The Corp’s well known and self-acknowledged lack of expertise or concern related to wildlife and habitat needs, will result in the devastating demolition of the Ballona Wetlands, followed by a dangerously risky industrial scale transformation of the Ballona Wetlands into a saltwater bay. Ballona’s unique and now rare coastal seasonal freshwater wetlands habitat will be forever destroyed.

Ballona’s multiple underlying freshwater aquifers, now classified as drinking water, will be ruined through increasingly acidified saltwater intrusion. As the Ballona Wetlands will be opened to flooding from the ocean, it will also be opened to flooding from millions of gallons of contaminated, toxic stormwater runoff, as waste from the entire Ballona Watershed storm protection infrastructure, will surge into Ballona, and blanket it with contaminants.

How did Ballona win this status as an Ecological Reserve?

The Ballona Wetlands Ecological Reserve has an incredible array of fauna and flora living there now, including endangered and imperiled species. There are miles of bike trails surrounding it; walking paths within it, and; multiple view locations already being utilized.

The financially, non-sustainable State plans include:

2. The displacement of over 5 million cubic yards of Ballona Reserve wetlands soil and habitat including major dig up/dig out excavation 25 feet deep (every cubic yard of soil weighs approximately one ton);

3. Flooding the excavation of this “bathtub” with millions of acre-feet of acidified saltwater and seasonal stormwater runoff carrying contamination, pollution, toxic sediment and trash; 4. The construction of three miles of 20-30-foot-high earthen levees, with a 200-foot-wide footprint, blocking historic views of the wetlands from public roads and neighboring developments.

This mechanized ten-year publicly funded FEIR transformation of Ballona Wetlands Ecological Reserve (BWER) into a Grand Saltwater Tidal Pool Park is a toxic vision of “restoration.” It is certainly NOT a restoration of a traditional seasonal wetlands environment made up of a diversity of wetlands habitats. While the rest of the world is strategizing to protect its coastlines, this project opens the coastline in our backyard to the destructive forces of climate change, it will never be sustainable, and it will destroy the BWER.

Why did the CDFW choose to finance the most destructive and expensive “restoration” alternative, already throwing millions of dollars of public money for its FEIR down a proverbial drain and washing that money out to sea? Why did CDFW fail to study a freshwater wetlands alternative? Why did the CDFW ignore the current Climate Emergency, choosing to demolish engineered levees that would protect Ballona, instead opening Ballona to the threat of rising and increasingly acidified seas, as well as the threat of increasingly common contaminated superstorm runoff colliding with ocean surges and king tides? Why didn’t the CDFW include a restoration alternative that addresses the systematic dewatering and systemic contamination of the Ballona Wetlands Ecological Reserve by private developers and fossil fuel interests? Why did the CDFW exclude stakeholders from the table whose interests were the preservation and protection of Ballona, rather than its destruction, transformation, and costly, unsustainable future?

We are Sierra Club.

- We ask that this unnecessary destruction of public land be rejected, this FEIR be denied, and the Ballona Wetlands Ecological Reserve seasonal freshwater ecosystem be preserved and protected

- We support local, State, and Federal authorities and ask them to hold all Ballona administrative, managerial, and oversight entities accountable.

- We call on the CDFW and ask it to inform the public what it intends to do as the next step of its process.

- We support the Los Angeles City Council, Mayor Garcetti, and Governor Newsom and ask them to call for a cost benefit analysis of shutting down SOCALGAS/PDR underground gas storage operations,

- We call on the City Council and ask it to hold SOCALGAS/PDR accountable for violations of its CUP.