Call for a statewide utility by Loretta Lynch...
California has leverage for takeover, ex-regulator says
http://enewspaper.latimes.com/infinity/article_share.aspx?guid=19e989a1-b35f-400d-812e-10f75297ec7a 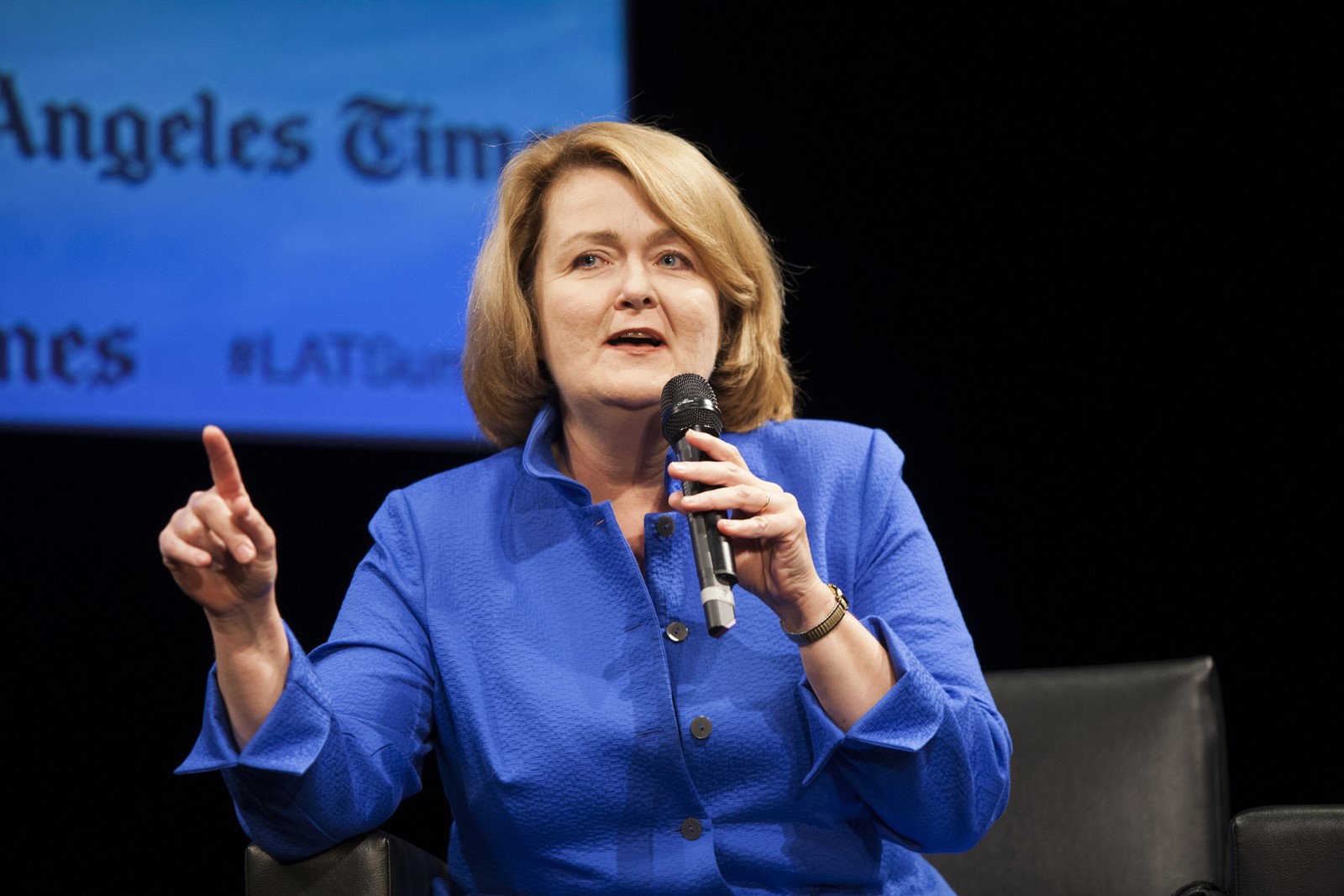 Following a string of utility-sparked wildfires that have killed scores of Californians and destroyed billions in property, the former top regulator of California’s electric grid says it’s time for sweeping change — a public takeover of Pacific Gas & Electric and possibly other private utilities, which would be transformed into a state power company.

Loretta M. Lynch, former president of the California Public Utilities Commission, said she was fed up with a system that failed to hold giant investor-owned utilities accountable for massive wildfires and sprawling blackouts.

“I think the only way to effectively protect all California families and businesses is to create a statewide power company that is state owned,” Lynch said in an interview.

That stance is a step beyond what many public officials, including Gov. Gavin Newsom, have been willing to publicly consider. Newsom has threatened a public takeover of PG&E, the state’s largest utility, if the company doesn’t quickly emerge from bankruptcy with a plan more focused on safety and reliability. He has stopped short of discussing a unified public power authority, though he has appointed a team of energy advisors to review all options.

Lynch said a public takeover of PG&E was a good place to start wresting power delivery from private hands. She said her five-year tenure at the utilities commission and intensive academic study had persuaded her that “public power is generally cheaper, safer, cleaner — with some exceptions — and more reliable.”

The state has the legal power, and leverage, to take over PG&E, Lynch said, particularly given the utility’s bankruptcy filing earlier this year and the behemoth’s obligation to follow the directives of a federal judge after its criminal conviction in a 2010 gas line explosion that killed eight in San Bruno, Calif. “The only thing that’s lacking now,” Lynch said of a takeover, “is the political will to do it.”

Public officials including Democratic state Sens. Jerry Hill of San Mateo and Scott Weiner of San Francisco have been talking about a public takeover of PG&E, a move supported by other lawmakers, such as U.S. Rep. Ro Khanna (D-Fremont.)

But there has not been a significant public discussion of shifting the rest of the statewide grid into public hands, in part because of the hurdles and costs involved. Those became apparent when PG&E last month rejected a $2.5-billion offer from the city of San Francisco to buy the utility’s power operations. PG&E Chief Executive Bill Johnson said the offer undervalued assets in the city and would not serve the company’s customers.

Lynch said she would “reserve for the future” the question of whether a state-run utility should be expanded beyond Central and Northern California, where PG&E serves 16 million people.

Her remarks come nearly 15 years after she left the Public Utilities Commission, following five years in which she infuriated industry giants such as PG&E and Southern California Edison with her positions during California’s energy crisis. She also alienated the man who appointed her to her post, Gov. Gray Davis, while consumer advocates praised her as a maverick willing to buck powerful interests.

Since leaving the commission in 2005, the Yale-educated lawyer has seldom relented in her call for greater scrutiny of the investor-owned utilities. Her incredulity has peaked in recent weeks, given what she sees as the electric companies’ inadequate wildfire mitigation plans and PG&E’s attempts to use its bankruptcy to “evade its responsibilities” for the fire disasters and the fragility of its electrical system.

“The utilities, not surprisingly, cut corners because they can make a better profit if they plow the money that the ratepayers give them into the latest shiny toy — like smart meters,” Lynch said, referring to the digital devices that measure electrical usage. “That’s what the regulators care about, instead of boring old imperatives like making their systems safe.

“So, very sadly, throughout California, the utilities ran the hell out of their systems and did not properly maintain them.”

PG&E spokeswoman Jennifer Robison rebutted the notion that the company was shirking its duty to compensate fire victims and strengthen its operations. She said the utility was “focused on fairly compensating wildfire victims, protecting customer rates, and putting PG&E on a path to be the energy company our customers expect and deserve.”

Most of the large and deadly wildfires that have hit California in recent years have been linked to the electrical grid. Fire investigators tied PG&E equipment to 17 of 18 blazes that scorched the wine country and other parts of Northern California in 2017. In 2018, a transmission line operated by PG&E sparked the Camp fire, killing 85 people and burning more than 14,000 homes.

In Southern California, Edison has acknowledged that its equipment will probably be found to be “associated” with the 2018 Woolsey fire, which destroyed more than 1,500 structures and killed three people in Los Angeles and Ventura counties. It also conceded a likely connection to the mammoth Thomas fire, which burned more than 1,000 structures and killed a firefighter.

Confidence in the safety of the grid had fallen so low by October that PG&E cut power to 730,000 customers across 34 counties, stretching from Humboldt County in the north to Kern County in the south. Another intentional outage left nearly 3 million people in the dark. Southern California Edison has warned it might cut electricity to hundreds of thousands of customers, though its largest blackout, in late October, hit some 30,000 homes and businesses.

The fires and blackouts come at a time when individuals and cities are looking for alternatives to big power companies whose mission is to earn maximum returns for their shareholders. Some customers seeking increased reliability and a smaller carbon footprint have been fleeing from the electric utilities to “community choice aggregators,” or CCAs. Started by local governments, the providers served 2.6 million homes and businesses last year, with an additional 1 million added earlier this year by just one CCA, Clean Power Alliance.

Radical new approaches also have been floated by local officials, including more than 20 mayors who, following the lead of San Jose Mayor Sam Liccardo, signed on to a plan to turn PG&E into a massive public cooperative. They want to duplicate the model of utility cooperatives that provide electricity in much of rural America.

Lynch, who serves on the board of San Diego-based Protect Our Communities, a consumer group, deems the mayors’ initiative serious and well-meaning.

“But it’s just a fact that it’s cheaper and easier to serve a densely populated urban area that’s not mountainous and that isn’t in the desert,” she said. “I’m concerned about other communities and other parts of the state. If you have a Swiss-cheese system — where people in the chosen cities get cheaper, cleaner and safer power — where does that leave everyone else?”

That’s the kind of question that Newsom’s new energy advisors are supposed to answer.

Short of a public takeover, Lynch is urging the Public Utilities Commission to become much more aggressive with investor-owned utilities, saying they would be more candid if the commission more often required them to make their presentations under oath, in full evidentiary hearings. She is not the first to question the utilities’ credibility.

Federal Judge William Alsup of San Francisco, who is overseeing PG&E’s criminal probation, has written about his need to “protect the public from further wrongs” by PG&E and “deter similar wrongs from other utilities.” The judge cited “PG&E’s history of falsification of inspection reports.”

PG&E responded, in part: “We share the court’s focus on safety.”

Lynch pegs the PUC’s change to a less aggressive stance to Michael Peevey, the former Southern California Edison chief executive whom Gov. Davis named to replace her as head of the commission.

“He truly believed that the utility knew best how to run its business. And the job of the regulator was to stay out of the way,” said Lynch, who taught at the Goldman School for Public Policy and was an executive fellow at UC Berkeley. “As a consequence of that philosophy ... the regulated ran the regulator. Here we are with the result of that, which is a broken-down, unsafe system.”

Peevey responded that Lynch’s attack on his record smacked of “sour grapes” and that he stood by his record, serving under Davis and Govs. Arnold Schwarzenegger and Jerry Brown. “I was the greatest commissioner that California’s ever had at the PUC.” He added, with a laugh: “For good or bad.”

“I believe that the job of leadership is to get the most out of the parties that are being regulated,” Peevey said, “in a cooperative fashion when you can, and if not, then you have to force them.”

The exchange is just the latest salvo in a long-running fusillade between the two, 15 years after Lynch left the commission and five years after Peevey stepped down. The state electricity crisis, in which California struggled to obtain enough power at the start of the new millennium, clouded her legacy. His tenure ended amid calls for his ouster, with some accusing him of overly cozy relations with the utilities.

Protect Our Communities, the San Diego-based group that Lynch has helped run, has demanded in PUC filings that the utilities provide more details about how they are going to prevent their lines and equipment from starting wildfires. The group insists that utilities’ wildfire mitigation plans need to offer more proof of the effectiveness of fixes such as replacing wooden poles with steel ones, lightening loads on power lines and replacing fuses.

Bill Powers, a mechanical engineer and Protect Our Communities board member, said utilities hadn’t focused enough attention on another upgrade — putting more separation between overhead power lines. In a phenomenon known as “line slap,” Southern California Edison wires collided in high winds in late 2017, the apparent cause of the deadly Thomas fire.

“They don’t even measure which mitigations actually work,” Powers said.

A spokesman at the Public Utilities Commission said new President Marybel Batjer, a Newsom appointee, has made clear she will get the utilities to focus more on safe performance and reducing planned shutoffs.

PG&E responded that it was working with the PUC “to continuously improve our plan and help reduce the state’s wildfire risk.” SDG&E spokeswoman Allison Torres called safety its “highest priority” and defended equipment inspections as required by the PUC and “vital to having a full assessment of our power grid.”

Lynch, not easily appeased, said: “They’re not just vague, the plans they filed, they are bull.”