Invitation to Limberlost - A Musical Performed in Hermosa Beach in April 23, 2019
Selections from a musical production by Helen Slayton-Hughes and Dana Lewis Powell based on Gene Stratton-Porter's 1909 novel Girl of the Limberlost and on the wetlands restoration project at the Limberlost Swamp in Indiana. St.Cross Episcopal Church, Hermosa Beach, CA 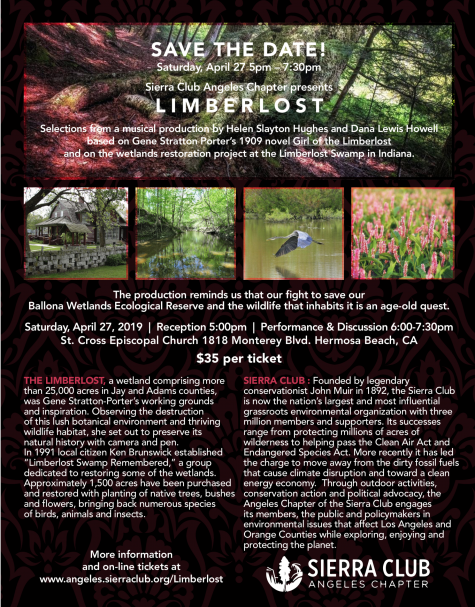 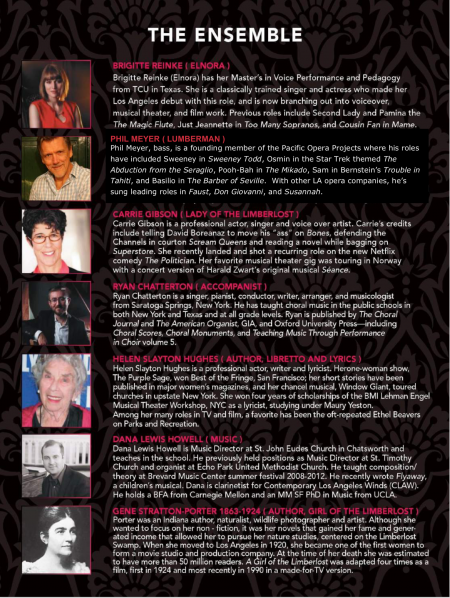 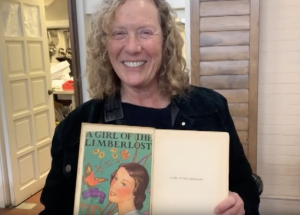 This area was drained by a steam powered dredge from 1888 to 1910. During these years of drainage,    Gene Stratton-Porter wrote the majority of her most successful novels and nature studies about the  Limberlost area. The Loblolly Marsh was the heart of the Limberlost. Once the wetlands were converted to farmland, and cropped from 1910 until restoration in 1992, crop losses from periodic flooding plagued the landowners almost yearly. But the biggest losses were the many species of plants and animals documented in Porter’s books.

By Miriam Faugno - Meet Gene Stratton-Porter-- One of those Very Famous People you probably don't know.  Yet.  She was the Most Famous, Best-selling  American Author of her time--at one point she out-sold Mark Twain.

She did have instruction in music -- her sisters taught her piano, banjo and violin.  She was the 12th and last child born on her parents' farm in Wabash County, Indiana -- the Frontier of America until the mid 1800's-- She spent her childhood learning from the Book of Nature--days, weeks, months spent in the Limberlost Swamp - originally covering 13,000 acres - a nearby Wetlands replete with Birds, Insects and Foxes and Frogs.  She wrote definitive guides to the Moths and Butterflies she observed daily.  She took the first photos of many moths found only in the area.

Against all Gene's work, dedication and activism, Limberlost was destroyed --obliterated-- until, through her efforts and in her memory, 1500 acres were returned to existence.  [Gene was quite a "modern" woman--in fact when she married Charles Porter in 1899, she demanded that she keep her name.  She was the 2nd Indianan woman on record to register her married name with a hyphen.]

Beyond that, she moved to Hollywood on her own, in the 1920's to head her own film production company, successfully filming her own stories for bigger audiences.  And, like many of  the women who created early silent films, her fame and art is forgotten> [She was there at the Creation of Hollywood, but now only known to scholars.]

We think of her when we realize the 2000+  acres of the Ballona Wetlands State Reserve is now reduced to less than 600 acres and even that is threatened daily.

Therefore we have partnered with Helen Hughes to support her evolving Musical Play based on Gene Stratton-Porter's  A Girl From Limberlost. We shall be letting you know when you can see and hear this spectacular hommage to Gene Stratton-Porter, Girl of the Limberlost and Indiana and A Friend to Wetlands everywhere.

Location and Access
Parking and trail. From Bryant, take SR 18 west for 3.6 miles to CR 250 West and turn right (North). Go about three-quarter mile (0.75 mile). The preserve is on both sides of the road and parking is available north of the Loblolly Creek. Trails: Veronica’s Trail is a 0.25 mile Americans with Disabilities Act
Trail located adjacent to the parking lot. This winding trail takes visitors
over a pothole and a small stream and ends on a small hill overlooking a
small upland meadow and large river bulrush wetland. Additional trails
pass through prairie, upland forest, bottomland hardwood forest, beside potholes, meadows, a large marsh, and along the Loblolly Ditch that
drained the area in the late 1800s and early 1900s.

This land was purchased from five different landowners who entered their land into the Wetland Reserve Program. The residual value was purchased using Indiana Heritage Trust funds. Other donors include ACRES Land Trust, Ropchan Foundation, M.E. Raker Foundation and Friends of the Limberlost/Limberlost Swamp Remembered Committee. The restoration of the wetlands began in 1992.

Many of the soils in the Loblolly Marsh are floodplains that connect to the Wabash River and they support river bulrush, sedges and prairie cord grass. Several muck flats support bur reed and cattail marshes. The upland areas are equally divided with prairie and restored forest land. A twenty-five acre mature woodland is a mixture of upland and bottomland hardwood trees.

This area was drained by a steam powered dredge from 1888 to 1910. During these years of drainage, Gene Stratton-Porter wrote the majority of her most successful novels and nature studies about the Limberlost area. The Loblolly Marsh was the heart of the Limberlost. Once the wetlands were converted to farmland, and cropped from 1910 until restoration in 1992, crop losses from periodic flooding plagued the landowners almost yearly. But the biggest losses were the many species of plants and animals documented in Porter’s books.

The Loblolly Marsh is a wetland complex containing emergent bur reed and cattail marshes where waterfowl reproduce. During drier times of the year, the marsh may have large mudflats exposed and shorebirds visit the area. Fall months are primed for the many migrating birds that feed on the abundant growth of annual plants. Winter months are a flurry of activity with all of the northern migrants and an occasional snowy owl.

In the spring, small potholes serve as mating areas for several species of amphibians. Sedge meadows and wet meadows are deafening with the calls of several frog species including northern leopard frogs. The woodland has a wide array of plants and the colors begin early. Waterfowl find nesting sites in the prior year’s growth of tall grass prairie. In late summer and early fall, the prairies explode with native plants that expose their flowers throughout the area.