Feeling the drought on my family farm 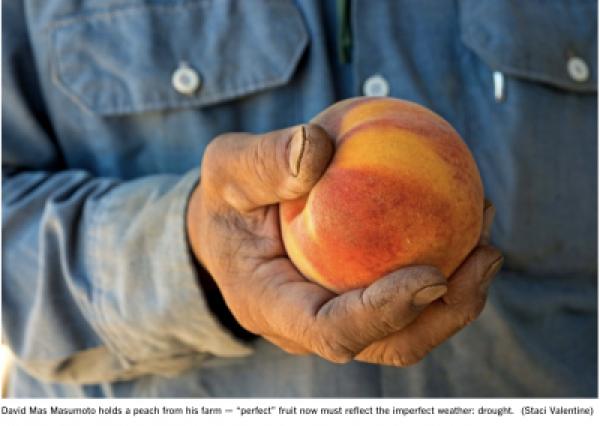 I can see my future: It’s dry, thirsty and bleak. On our farm, we live with drought daily, working with limited groundwater and learning to adjust and adapt, or to fail and abandon our fields. Water will determine a farmer’s survival.

I farm organically outside Fresno, part of one of the world’s richest and most productive agricultural oases, providing, of course, that we have water. Typically, we make use of two sources of the liquid gold: annual rainfall and snowmelt captured from the Sierra, and also the pool of groundwater lying beneath our land. Both are threatened by a lack of rain and snow, exacerbated by the slow depleting and over-pumping of our aquifers.

In the past, many of us took water for granted. We simply turned on the faucet or flicked an irrigation pump switch and the water magically appeared. It was there when we needed it until it was not.

Many farmers shifted to drip irrigation, which limits water usage and keeps plants alive but intensifies irrigation’s depletion of soil biology. We fell into the trap of believing technology and innovation would rescue us from water scarcity. Today, a reality check greets each season: We can’t make more water or control the forces of nature.

A severe two-year drought is drying out the West and Southwest from Washington to California, Montana to Texas. Agriculture feels the impact with crops withering and production limited. We have begun fallowing some of our fields, pulling out vines and trees and leaving empty land that my father and grandfather cultivated. They would cringe to witness what must be done.

Every fallowed field means a declining rural economy and an uncertain future. The reach of the drought will be felt in grocery stores across the country with higher prices. Cheap food may no longer be the driving force in agriculture. Everyone will pay the price of a lack of water.

Climate change can’t be denied. Historical rainfall amounts, based on 30-year averages, do not capture the significant variations of normal climate. And now drought is becoming the new normal; the golden era of consistent rainfall over the last 50 to 100 years may have been the anomaly. Megadroughts lasting decades may be on the horizon.

While farmers struggle with dwindling water, extreme temperatures — 116 in Portland, Ore., at the end of June or 118 in Phoenix — touch many more people. Suddenly nature takes on a new reality for city folks too, who feel the heat and can taste the sweat of climate change.

How do we value water? Some farmers and water districts are faced with the decision: Selling their water may be more profitable than farming. Will monetizing water become part of my family’s farming operation?

A larger issue looms: Who rightfully owns water and how should a natural resource be controlled and allocated?

Already farmers in California — some kicking and screaming, others accepting that water has become a limited resource — must plan for sustainable groundwater use and limit pumping so that our aquifers maintain a steady supply. How do cities and the environment fit into our water future? The answer is not solely economic or political: We must re-envision water as something scarce and sacred and shared by all.

On our farm, we grow perennial crops — organic peaches, nectarines, apricots and grapes for raisins. We have 100-year-old vines and 60-year-old peach trees that have witnessed massive swings in climate — dwelling on one season or year is short-term thinking. COVID-19 underlines another lesson for this old farmer: Things are often out of our control. How we respond will determine what happens next.

I think of generations on the land, and what story I’m leaving behind for my daughter, Nikiko, who is partnering on the farm along with her brother, Korio. They will inherit climate change, prolonged droughts and whatever comes of the decisions we make now.

At the heart of our farm lies a Japanese aesthetic captured in the meaning of wabi-sabi: Life is imperfect, impermanent and incomplete. The drought exposes the inconsistency of nature and how the “perfect” peach must reflect the imperfect weather we all experience.

Despite our thirsty future, there’s a note of hope for me — I believe our farm is still incomplete. I inherited all I have from my parents and grandparents; my children will take over this incomplete farming story and add their own chapters.

I’m reminded of the feeling early in a farm year. When I work the fields in spring, something is plowed into me. With these inconsistent yet regular droughts, something more is now plowed into our family farm.

David Mas Masumoto is a farmer in Del Rey, Calif., and the author of many books, including “Epitaph for a Peach: Four Seasons on My Family Farm.”