"There’s an ongoing project to re-engineer the Ballona Wetlands, transforming it from a traditional seasonal freshwater wetlands into a full tidal estuary.
Activists claim that by mechanically restructuring Ballona, the plan will destroy existing habitat, wildlife, soil, and sub- soil systems. It will contaminate ground- water and underlying drinking water aquifers with increasingly acidified saltwater, micro-plastic infusion, toxic urban runoff and sediment. Also, there’s a natural gas storage facility under Ballona that leaks in a number of places.
To find out more about Ballona, the project, and the environmental objections to it, go to the website for Grassroots Coalition: https:/saveballona.org." 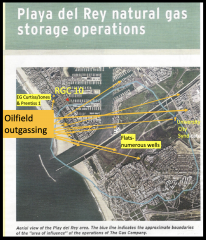 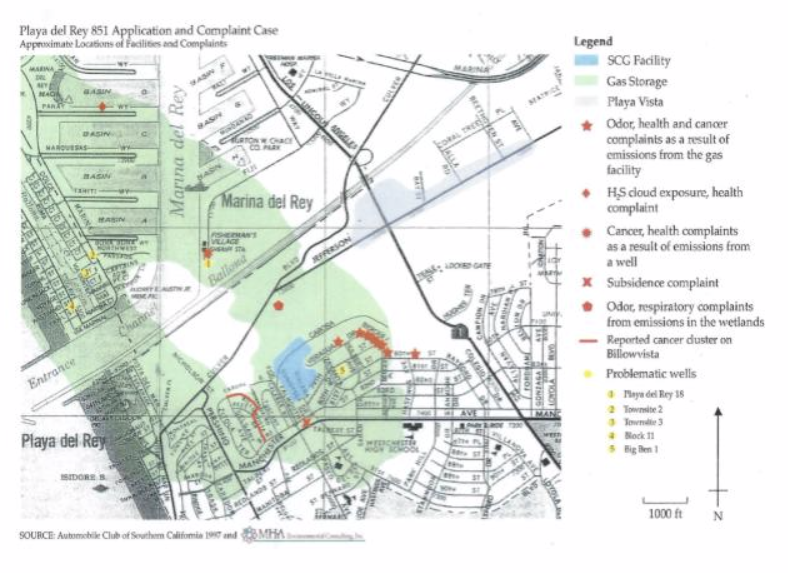 Help Stop SoCalGas flaunting the rules as if our safety doesn’t matter!

A Hearing for public and council response to the Report has yet to be determined.

In general, regarding the CUP between the City of LA and SoCalGas/ Playa del Rey Underground Gas Storage Operations, the City Planning Report opines,

-that the city has no authority to enforce the CUP; that the CUP ONLY addresses surface buildings and equipment.

- that the authority for SCG/PDR operations lies with the California Public Utilities Commission and Cal Gem.

Acting as if the 2016 Porter Ranch gas-leak disaster never happened, as if 5000 people were not displaced from their homes, with fumes affecting everyone within 7 miles of the methane leak, and with SoCalGas facing a wrongful death lawsuit among many others, SoCalGas/Playa Del Rey underground gas storage operations within the Playa del Rey oilfield, still continue to compromise the health and safety of everyone throughout the directly overlying neighborhoods of Playa del Rey, Venice and Marina del Rey. Numerous dangerous incidents and even closure of the site by the Division of Oil & Gas for a year due to reservoir gas leakage to the surface in 2010-11, reveal the toxic incompatibilities of underground gas storage under this highly urbanized area.

The Los Angeles Conditional Use Permit was created in 1955, when SoCalGas bought the pilot storage operations from the federal government, as a Covenant of Promise to Protect the overlying neighborhoods zoned as Residential while harboring the dangerous operations directly under the impacted neighborhoods. The city created the Permit to both allow for this dangerous utility in the midst of homes that were being built, accruing in value and revenue to the city.

Also at risk, and Immediately overlying the storage field are the Ballona Wetlands, acquired by the public in 2004, (for $140million taxpayer funds) with the stipulation from Los Angeles Building & Safety that no residential buildings would be allowed over the gas storage operations and a new buffer zone was created to aid in the city’s attempt to mitigate oilfield gas leakage discovered in 2000-1 in this area, called by LA’s oilfield gas expert as the largest oilfield gas leakage area in the U.S. New, and in part, experimental gas mitigation measures were required for the Playa Vista development site creating new LA City Ordinances for methane mitigation- 1. Playa Vista Methane Prevention Detection and Monitoring Program and 2. The Citywide Methane Code.

Request for Hearing in order to dispute the Report’s findings and in particular to support that:

-The city does have authority to compel SCG/PDR to abide by the Conditions of the Permit which include:

-The city does have surface and below ground authority as demonstrated in earlier LA City Planning approvals requested by SCG/PDR.

LA City Planning has been provided with information by Grassroots Coalition, garnered during litigation with SoCalGas. Internal Memos and documents demonstrate that SoCalGas provided misinformation to the City of LA in order to garner permitting from the city for new well drilling, abandonments and oil/gas equipment installations.

The City Planning Report does not disclose or address this data in the city’s Report. Further, the city Report fails to provide numerous LA City documents, that Grassroots Coalition copied from LA’s Piper Center Complex and re-provided to LA City, which support that the city has previously maintained jurisdictional approvals of SoCalGas underground gas storage operations, including utilization of the California Environmental Quality Act process (CEQA).

- SCG has failed to abide by the Conditions of the Conditional Use Permit. In particular Condition 17 which states that SCG will maintain its pressures in a manner to disallow gases escaping to the surface.

- SoCalGas’ has deliberately mischaracterized its operations to the City of Los Angeles, in order to secure LA City Planning approvals requested by SCG/PDR. Including but not limited to:

- SCG has deliberately failed to inform the city of SCG’s lengthy history of its reservoir gas leakage to the surface and for allowing its wells to act as conduits for other gas migration to the surface.

- SCG has failed to inform and clarify to the City of LA that its gas storage has expanded into the Venice Peninsula, outside of the approved 240 acre permitted area.

TALKING POINTS & TOP DEMANDS for everyone’s health and safety, we need to demand that the LA City Planning Department do the following ASAP:

1. Hold a public Hearing responsive to Motion CF 19-1124, inclusive of all documents and data that Grassroots Coalition provided to LA City Planning.

2. Demand that the City of LA enforce the conditions of SoCalGas’ Conditional Use Permit, because whether you live in LA or not, your health and safety is at stake.

3. Update and amend the Conditional Use Permit to ensure safety by lowering the gas pressure limits of the Playa del Rey operations to assure that SCG’s storage gas is sequestered within the permitted 240 acre operational areal extent.

4. Support the CUP condition that the City of LA has the legal right and obligation to shut down the Playa del Rey gas storage operations for failure to abide by:

- Specifically item #17 requiring SCG to operate at pressures that disallow gas migration to the surface; and to also abide by keeping its operations within the approved 240 acres, stopping the migration of their gases into Venice.

The City of Los Angeles should hold SoCalGas accountable for costs of full remediation to Ballona’s underlying freshwater aquifers to a DRINKING WATER standard; leaking wells and ongoing monitoring for subsidence, well leakage, re-pressurization of the oilfield which can give rise to gas leakage via the former leaky SCG wells and other wells of dubious abandonment within the operational area of SCG/PDR including Venice. The recent eruption

What You Can Do:

Send your personalized comments and/or cut/paste from above and email RE: COUNCIL FILE 19-1124 to:

Send your message to the legislative assistant Armando Bencomo and request he forward your mail to the Committee Members, or send to each: