"The greatest threat to our planet is the belief that someone else will save it."
Robert Swan, Polar Explorer and Inspirational Speaker

2019 Corroded Well Lining Caused Alison Canyon Gas Leak that displaced thousands, report says,
"In a 258-page report, investigators said that groundwater had corroded the metal lining of a more-than-50-year-old underground well, leading to its rupture at 892 feet below ground. The report also said that SoCalGas, the company that owns and operates the natural gas well, did not meaningfully investigate or analyze more than 60 previous leaks at the facility The company did not properly monitor its wells at the site, the report said, adding that “the approach to well integrity at Aliso Canyon had been reactive rather than proactive.”
https://www.nytimes.com/2019/05/17/business/porter-ranch-gas-leak.html?action=click&module=Latest&pgtype=Homepage

2016 Porter Ranch Leak Raises Concerns Elsewhere
http://america.aljazeera.com/watch/shows/live-news/2016/2/porter-ranch-leak-raises-concerns-elsewhere.html
In the early 1990's Patricia McPherson, President of Grassroots Coalition, became concerned about oil and gas leaks in Playa del Rey, California. With the help and guidance of Dr. Bernard Endres, an oil field gas migration expert, author and attorney, her interest expanded into oil and gas fields throughout California and continues to this day. 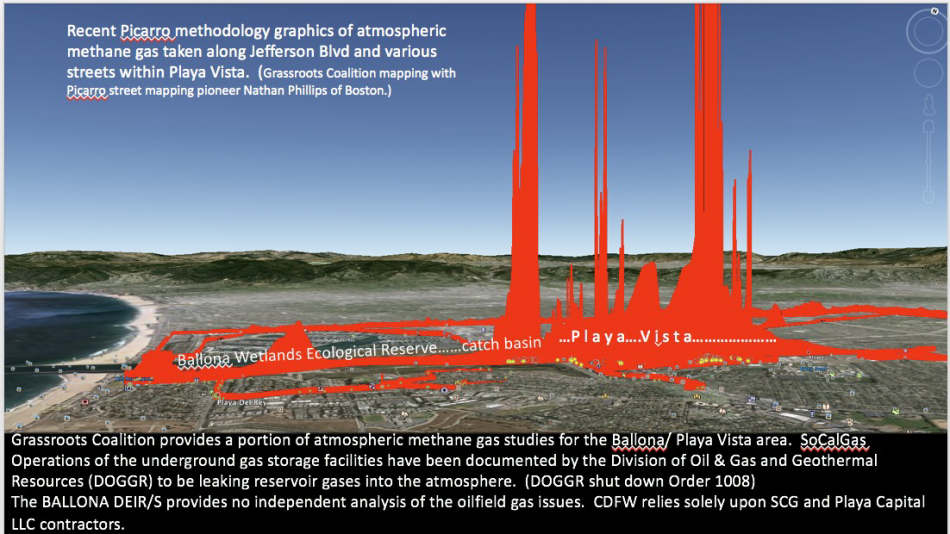 Nathan Phillips, a pioneer of utilizing the PICARRO methodology of ambient methane air testing on streets in Boston, worked with Grassroots Coalition to provide the PICARRO graphics of ambient air methane monitoring for the  Los Angeles basin.  Above, is one graphic, among many in the Ballona Wetlands area, that reveal high levels of methane out-gassing along Jefferson Blvd.  The catch basin, aka freshwater marsh, is seen above, showing the first skyrocketing levels/spikes of methane. The high levels/spikes continue across the Playa Vista site.  To the west of Lincoln Blvd. larger spikes of methane can also be seen. (2014)

Activist Action: Study health impacts of living near an oil or gas field. Comment to public officials: Ask them to ban fracking & oil production, particularly in densely populated areas. This Playa Del Rey site contains 20+ years of research.
It's Official: Solar Is Becoming World's Cheapest Form of New Electricity
For the first time, solar power is becoming the cheapest form of electricity production in the world, according to ... READ MORE

How to do a Freedom of Information Act (FOIA) Request

Before she retired in 2014, Anneliese Anderle was a field engineer for the Division of Oil, Gas and Geothermic Resources, which regulates oil drilling. She worked out of offices in Bakersfield, Cypress and Ventura, and for a while she was responsible for monitoring the massive natural gas storage field at Aliso Canyon.

Southern California Gas owns the facility, which distributes gas to 14 power plants and 21 million customers. In her years monitoring wells at Aliso Canyon, Anderle says she got to know the gas company as "a first-class operation."

An August 2014 quake in Canada has been confirmed as being caused by fracking.  We have included below the URL of the article at www.EcoWatch.com , where similar news can be email subscribed to, and a quote that includes the newspaper article of the www.VancouverNews.com